On The Way “Uptown”: The Funky Chart Figures 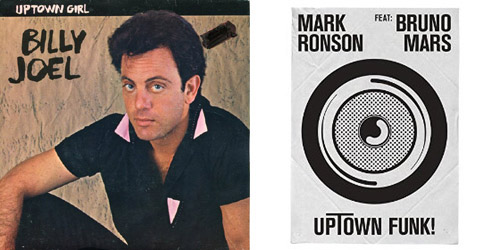 Today marked the debut of “Uptown Funk”, a snazzy and sensational number from producer Mark Ronson and singer Bruno Mars. It is the latest collaboration for the two musicians, last working together for Mars’s Unorthodox Jukebox album. Currently up in the top 30 on iTunes, it should go even higher thanks to radio’s quick reaction (which includes a one day iHeartMedia hourly deal for the CHR format.)

In that spirit, it’s time to go further uptown, because should this “Uptown” make its debut in the top 40 on the Hot 100, it will be the fifth such title to feature the term. It’s a mighty big goal, but a hot single is a hot single. Check out the rest of the best:

“Uptown”, The Crystals (#13, 1962)
One of the many Phil Spector produced acts to hit the charts, the girl group drew national attention a year prior with the song “There’s No Other (Like My Baby)”. They managed a string of big singles (with a few lineup changes) through 1963.

“Uptown Festival – Part 1”, Shalamar (#25, 1977)
Though its best known lineup included Howard Hewett, Jeffrey Daniel and Jody Watley, the album on which this song is included was recorded by several session singers. Nevertheless, it put the group’s name on the R&B and Hot 100 charts.

“Uptown Girl”, Billy Joel (#3, 1983)
One of my favorite Joel albums is 1983’s An Innocent Man. “Uptown” was one of six top 40 releases from the album, the most successful in terms of the quantity of hits in his catalog. The classic track is still heard often on Classic Hits outlets.

“Deja Vu (Uptown Baby)”, Lord Tariq and Peter Gunz (#9, 1998)
It was one and done for this rap duo from New York, and though Pop radio didn’t touch it, huge airplay on both Rhythm and Urban radio propelled it up the survey and to a Platinum certification. The two were no more by the following year.