Stay a while, Niall.

(See my full chart on Crownnote)

Songs “You” should know.

It’s the start of another weekend, which means it’s time for another trip back into the archives on Adam’s Top 40 Flashback! Every Saturday, the day before my latest top 40 goes up for the week, I feature the highlights of a past countdown. They’re all here — the hit songs, the songs that flopped, and the songs that may be a little embarrassing to reflect on.

This week, we stroll back nine years and find out what was topping my chart for the week of March 29, 2009…

Check back next Saturday for another Adam’s Top 40 Flashback and don’t forget to follow the blog by using the tab below or find PGTC on social media by clicking the “Get Social!” tab at the top of the page.

What’s new for this Weeknd.

The weekend has finally arrived, and so has The Weeknd with an unexpected gift for Passover and Easter. Don’t be melancholy; here are the albums and singles you need to know on digital services and in stores this Friday:

THE WEEKND – My Dear Melancholy (iTunes)
Confirmed mid-Thursday on his social media accounts, the Canadian superstar delivers his first album since the fall of 2016. Don’t call it a comeback, however: The Weeknd’s soundtrack hit with Kendrick Lamar, “Pray For Me”, is still performing well at several radio formats here and up north, as Black Panther continues to dominate at the box office. Few details are known about the project at this time. Look for it to debut at #1 on the Billboard 200 chart, replacing Jack White.

KACEY MUSGRAVES – Golden Hour (iTunes)
Backed by a healthy dose of critical acclaim and a passionate fan base, this album by Musgraves should become her third top five title since 2013 on the Billboard 200 chart. All three songs released prior to the album’s debut, “Butterflies”, “High Horse” and “Space Cowboy”, have performed solidly at both sales and streaming services. It’ll likely top the country-specific survey with ease.

RICH THE KID – The World Is Yours (iTunes)
After a series of notable mixtapes in the last few years, this performer puts his first studio album out into the World, featuring appearances by Kendrick Lamar, Khalid and many others. With streaming hit “Plug Walk” leading the way, look for consumption units of this effort to trend significantly higher than pure album sales.

Next week: look out for new albums from Kylie Minogue, Thirty Seconds To Mars and more. For Adam’s personal picks of the week, listen to the PGTC Friday Faves list on Spotify!

Welcome to Add Lib, your Tuesday report on POP! Goes The Charts that’s mad about CHR/Top 40 adds, based on the station data provided by Mediabase 24/7 and Add Board. This week: Shawn Mendes slays the pop panel with an impressive first week for his latest single, while proven hits from Bazzi, Halsey and Taylor Swift all continue to perform well. Let’s add ’em up:

OUT FOR “BLOOD”: 19-year-old Shawn Mendes sinks his fangs into the heart of the pop panel this week, though I doubt he’s looking to become the next Bela Lugosi anytime soon. “In My Blood”, the lead single from his forthcoming third album, pumps the chartbeat of the Most Added spot on the latest update, scoring 129 stations on impact. Another cut from the highly-anticipated set, “Lost In Japan”, received a single add this week; it placed at #2 on iTunes, behind “Blood”, for several days after it was released. It could pick up additional stations in the coming weeks, but with “Blood” as the focus track from the project, “Lost” isn’t likely to get into the top 50 anytime soon (unless it gets a larger push to the format.) No word on the title of his upcoming album or a date as of yet, but we’ll see if any tea gets spilled soon.

Another notable new record in the top ten is a collaboration from Eminem and Kehlani, “Nowhere Fast”, in fourth place with 22 stations on impact. This is the third radio single from Eminem’s most recent album, Revival, which was released late last year. The highest-charting of the three so far, the Ed Sheeran-assisted “River”, reached #20 last month. Next week, look out for Logic and Marshmello, currently in sixth place with 17 new stations this week, to attain a bigger sum for “Everyday” in its official impact.

It’s time once again to analyze the airwaves and find out if your favorite new releases will be lighting up your local station’s playlist this week. Which tunes will climb to the top and which ones will hit a stop? Here are the two of the new tracks impacting this week at the Top 40 format:

SHAWN MENDES – “In My Blood” (Island/Republic)
Album: TBA (2018)
Past T40 History: Mendes recently scored his sixth top 40 hit at the format, as his forthcoming set looks to add more to that total.

Next week: a big collaboration from Logic and Marshmello is the only song (so far) impacting at the format. Who’s going to join the party? Stay tuned! 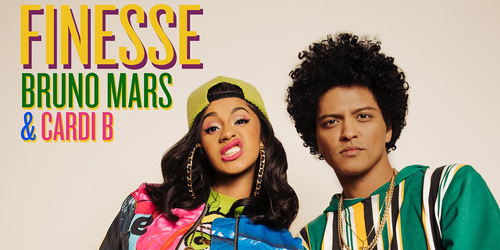 Welcome to Radio Active, a Sunday evening report from POP! Goes The Charts that gets to the chart of the matter: all the highlights from the CHR/Top 40 chart, as published by Mediabase 24/7 and Mediabase Research. Remember to file your taxes in the next few weeks, while simultaneously breaking out the MP3 files to enjoy the sweet sounds of pop music from this week’s Top 40 survey. (Do kids these days even know what an MP3 is?) Let’s count the hits:

NEW JACK SWINGS: Congrats to Bruno Mars and Cardi B, who leap from 3-1 on this week’s Top 40 chart with “Finesse”, the eighth #1 at the format for Mars and the first for Cardi B. Mars collects his second #1 track from the 24K Magic era, as “That’s What I Like” spent a total of three weeks at the top last April and May. (The original version of “Finesse” appears on the album, though its current remix does not.) The global hit continues in the top ten at three other radio formats, reaching #1 at one (Rhythmic) during a two-week run last month. Next Sunday, look for “The Middle”, a three-way collaboration from Zedd, Maren Morris and Grey, to potentially top the survey, as it advances 5-2 this week with a very healthy bullet.

HOT BLOODED: Launching all the way up at #28, Shawn Mendes scores his sixth top 40 entry and highest debut to date at the Top 40 format with “In My Blood”. His previous high of #31 was set by “Treat You Better” back in June 2016. It’s the first release off Mendes’s third studio album, due sometime later in the year. One extra cut from the album, “Lost In Japan”, was released on Friday to both sales and streaming success, though its airplay was minimal. (I’ll save the Japanese artists and song titles for another week!) Another top debut on this week’s top 40, coming in at #35, is the seventh top 40 song for Halsey, called “Alone”. Combined airplay for an edit of the original album version and a new remix with Big Sean and Stefflon Don spiked as a result of the single’s second place finish on last Tuesday’s adds report, where it pulled in nearly 60 stations on impact.

Among the new entries in the top 50, watch out for “Everybody Hates Me” by The Chainsmokers, logging on at #43, which might become the duo’s eighth top 40 song at the format next week. “Sober Up”, the former Alternative chart-topper by AJR and Weezer lead singer Rivers Cuomo, is also aiming for the top 40 next week, ranking at #48 on the current update. The trio has a pair of top 40 entries to date, while Cuomo’s only solo appearance was in 2010 on B.o.B‘s “Magic”, spending three weeks at #13 in September. 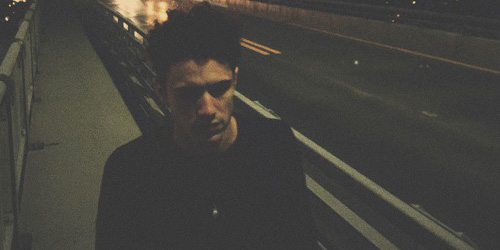 7CHARIOT – “Danger In Me” (Spotify)
Previously on the Rewind: Previously featured as Clairity; first time featured under new project
Notes: Though I do miss her Clairity project from several years ago, including pop bops like “Velcro”, the new tune from 7Chariot is worth a chariot ride (or seven) over to your streaming service of choice. “Danger” isn’t dangerous at all, with its cool tropical sound.

BEN HOBBS – “Simple Life” (Spotify)
Previously on the Rewind: Five previous appearances, “Two Pieces” (February 2018) being the most recent feature
Notes: The London-based performer, who frequently makes the Rewind, issued a double a-side single on Friday, featuring the song noted here and “Blind To You”. Both tracks are quality for different reasons, but this new wave-influenced cut really caught my ear.

MARC SCIBILIA – “Over You” (Spotify)
Previously on the Rewind: Three previous appearances, including “Believer” (July 2016) and “Summer Clothes” (February 2017)
Notes: Scibilia’s been slaying the independent game for several years now, picking up several million streams in the process, as well as a massive hit in parts of Europe with DJ/producer Robin Schulz. His latest track sounds like a future hit on the Hot AC airwaves.

For more great new music, these songs are worth a listen…
FINNEAS – “Heaven”
GRIZFOLK – “Endless Summer”
RUTHANNE – “The Vow”

(See my full chart on Crownnote)

It’s the start of another weekend, which means it’s time for another trip back into the archives on Adam’s Top 40 Flashback! Every Saturday, the day before my latest top 40 goes up for the week, I feature the highlights of a past countdown. They’re all here — the hit songs, the songs that flopped, and the songs that may be a little embarrassing to reflect on.

This week, we stroll back five years and find out what was topping my chart for the week of March 24, 2013…

Check back next Saturday for another Adam’s Top 40 Flashback and don’t forget to follow the blog by using the tab below or find PGTC on social media by clicking the “Get Social!” tab at the top of the page. 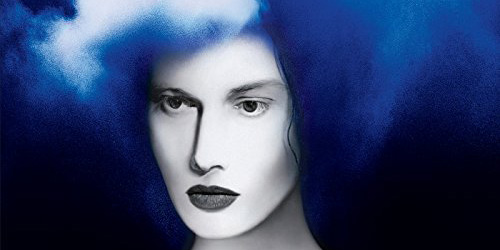 You don’t know Jack about this week’s releases.

It’s looking white outside after another snowstorm on the East Coast, and next week’s album chart is looking pretty White too. Here are the albums and singles you need to know on digital services and in stores this Friday:

JACK WHITE – Boarding House Reach (iTunes)
Featuring the radio singles “Connected By Love” and “Over And Over And Over”, the former in the top 20 at Triple A radio and the latter in the top 30 at Alternative radio, White hopes to bring his streak of solo #1 albums to three with his current set. Can he do it? Stay tuned.

JORDAN DAVIS – Home State (iTunes)
Davis’s first single to make the Country radio chart, “Singles You Up”, has enjoyed a slow ride into the top ten and is currently closing in on the top five. Look for this set to have a good chance of becoming the top title on that genre’s album chart next week.

Next week: look out for new albums from Hayley Kiyoko, Kacey Musgraves and more. For Adam’s personal picks of the week, listen to the PGTC Friday Faves list on Spotify!