Tag Archives: Wish I Knew You 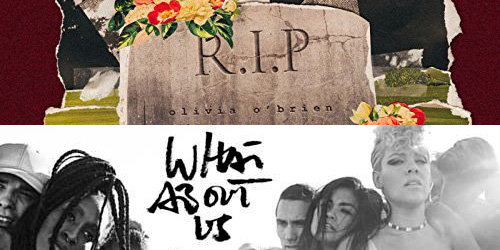 It’s time once again to analyze the airwaves and find out if your favorite new releases will be lighting up your local station’s playlist this week. Which tunes will climb to the top and which ones will hit a stop? Here are the four new songs impacting this week at the Top 40 format:

OLIVIA O’BRIEN – “RIP” (Island/Republic)
Album: TBA
Past T40 History: O’Brien reached #5 last fall as the featured artist on gnash’s “i hate u, i love u”. This is her first solo radio single.

THE REVIVALISTS – “Wish I Knew You” (Washington Square/Concord/in2une)
Album: Men Amongst Mountains (2015)
Past T40 History: It hit #1 at Triple A last September, followed by #1 on the Alternative chart in May. How will the group do here?

Next week: at least six songs head to the format next Tuesday, including hot new tracks from Blackbear, Dua Lipa and Halsey.

Tagged as Olivia O'Brien, Pink, radio, Rain, RIP, The Revivalists, The Script, Top 40, What About Us, Wish I Knew You