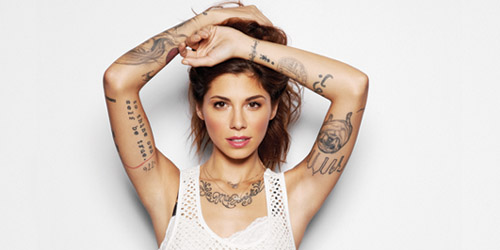 Life changed pretty quickly for singer Christina Perri during the summer of 2010 when her debut single, “Jar Of Hearts”, was featured in a performance on the FOX show So You Think You Can Dance. Three weeks later, she was signed, and her single took the slow and steady approach up the radio charts, breaking the Hot AC top ten by January 2011 and eventually topping the 3 million mark in sales. Her first full-length album, lovestrong., followed in the spring and debuted in the top 5 on the Billboard 200. Three more singles, a 2012 Christmas EP and lots of tour stops later, she’s returned with a gorgeous new album titled Head Or Heart; you’ll have to use both to pick up a copy of this.

The majority of the album is spearheaded by the great British producer Jake Gosling, who does an amazing job with the cuts he worked on. He’s previously worked with acts like Ed Sheeran and One Direction, and he gives the tracks he created with Perri such a life and energy that the experience is not only entertaining, but a genuine one. Head Or Heart marks a set of songs about a woman and her newfound romance, one who has overcome a lot and yet still has some doubts amongst her many desires. Yet, the days of lovestrong. are gone. This is a new era, and this is a new Christina Perri.

It all begins with opener “Trust”, one of the more emotive songs on here and one that seems to be influenced by the new age genre. Perri takes a direct approach in the lyrics: “I knew better than to trust myself, to trust someone else/To trust the lies that slip from my mouth, trust the heart I’m so quick to sell.” That’s some pretty strong language, but they are words from a matured and experienced singer. Following that is second single, “Burning Gold”, an emphatic expression of passion as co-written by Tom Hull, better known as musician Kid Harpoon. The result is a piece not unlike Florence + The Machine, whom Hull also worked with, dazzling in a percussive-driven pop radiance.

Tracks three and four on the album are the most single-worthy of the bunch, led by the sweet sounds of “Be My Forever”, a bubbly and charismatic tune that matches Perri with singer Ed Sheeran to an absolutely perfect result. (Although, shhh… I would’ve secretly loved to hear co-writer Jamie Scott as the male lead on it.) From one lover to the other, Perri gleefully sings, “We’re on top of the world, now darling, so don’t let go.” This has future wedding song written all over it, regardless of the season, although it does lend itself nicely to a warm spring or autumn day. From there is the dramatic, but truly real “Human”, co-written by Martin Johnson of Boys Like Girls. With a tender build, enhanced by a lyric about the flaws we all possess and try to look beyond, it’s a stellar number and, as you may know from reading my chart, spent six weeks at #1 and currently ranks as one of my top songs of 2014 thus far. It’s beautiful.

You probably don’t want to hear me go on for hours about this, but the thirteen tracks that encompass Head Or Heart make for one cohesive listening experience. Other favorites from the list include the dreamy “One Night”, about a woman “so out of breath and hungry” for her love that she wants to “be the moon hanging over” and “the star falling where you are,” as well as “Sea Of Lovers”, which brings Perri into metaphorical mode against an arrangement reminiscent of Coldplay‘s “Yellow”. She sings, “You’re the only way out of this sea of lovers losing time/…will you let me follow you wherever you go?/Bring me home.” Ballad “The Words” introduces a slightly darker tone into the mix, perhaps comparable as the “Jar” of this album, as does “Butterfly”, which slightly resembles the Linda Ronstadt and James Ingram duet, “Somewhere Out There”. I also have give props once again to Jamie Scott, who co-wrote “Shot Me In The Heart”, which is just pure pop goodness.

Like any album, this one could’ve had a tweak or two particularly about two-thirds into it, but it’s not serious enough to put a damper on it. Believe me, Head Or Heart was one of my most anticipated albums of this year since first heard “Human” in the middle of November, and it’s far from disappointing. With all the new writers, producers and collaborators participating on the effort, it’s wonderful to see that the time and work all paid off. To see the confidence boost and growth in any artist is admirable, but to also love their love is something really special. Since “Human” is still growing at radio, and Perri’s base of fans is growing along with it, my own confidence in the record is pretty high as well. You won’t want to pass it over.

As she states at the end of closer “I Believe”, “This is not the end of me/This is just the beginning.” We can all believe in that.

(Stream and pre-order Christina Perri’s Head Or Heart, due in stores April 1)

Tagged as Be My Forever, Burning Gold, Butterfly, Christina Perri, Ed Sheeran, Human, One Night, Sea Of Lovers, Shot Me In The Heart, The Words, Trust