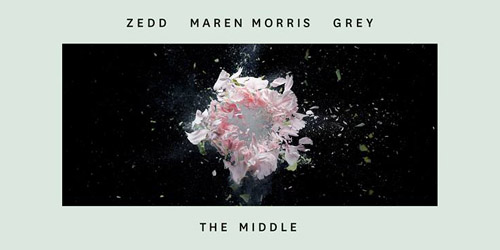 Welcome to Radio Active, a Sunday evening report from POP! Goes The Charts that gets to the chart of the matter: all the highlights from the CHR/Top 40 chart, as published by Mediabase 24/7 and Mediabase Research. Even as Governors Ball concludes, the CHR airwaves always need a musical mayor to rank at the top. Who will it be this week? Get all the stats you need below:

CAUGHT IN “THE MIDDLE”: After four weeks in the runner-up slot, “The Middle”, by Zedd, Maren Morris and Grey, gets a second run at the top, making this frame its sixth non-consecutive week at #1 on the pop format. This is not the longest wait for a #1 song to return to the summit; 20 years ago, Savage Garden‘s hit “Truly Madly Deeply” sat at #2 for nine weeks between its second and third weeks at the top, the longest stretch in the Radio & Records/Mediabase timeline. The big collaboration was also very close to a fifth non-consecutive week at #1 on the Hot AC chart, but missed returning by about 20 spins. This extra time at the top doesn’t look it’ll last much longer, however, as a certain musical maniac (at least, by song title) looks poised to take over in the coming days. You might almost say it’s a $ign of the times…

A “BETTER” WEEK AHEAD: Though it’s a relatively slow chart week toward the top of the survey, four new tunes come into the top 50 this week. Leading the way, the Australian act 5 Seconds Of Summer hops aboard at #44 with the song that remains at #1 down under, “Youngblood”. This is the title track from their upcoming studio album, which is now out on June 15. Israeli newcomer Dennis Lloyd settles at #46 with “Nevermind”. Lloyd’s first U.S. chart entry has been performing extremely well on Spotify, where it surged as a result of notable pop and dance playlisting globally. The single is charting or has charted in much of Europe, achieving top ten peaks in countries like Germany, Norway and Sweden. From there, bouncing in at #49, is a single that remains the top seller on iTunes here in the U.S.: Maroon 5‘s “Girls Like You” and its updated version featuring Cardi B. Next Sunday, “Girls” will likely become the group’s 26th top 40 entry on the pop list, which comes just short of the 15th anniversary of “Harder To Breathe” making the top 40 at the format. Lastly, at #50, Post Malone‘s “Better Now” debuts prior to its impact date on Tuesday. If you didn’t catch the hint before, Malone’s “Psycho”, featuring Ty Dolla $ign, should climb to #1 (currently at #3) on next week’s update.

Welcome to Radio Active, a Sunday evening report from POP! Goes The Charts that gets to the chart of the matter: all the highlights from the CHR/Top 40 chart, as published by Mediabase 24/7 and Mediabase Research. Spring is finally in the air, and that means a few new seasonal smashes are also sprouting in the lower rungs of the survey. What’s getting planted in the world of pop? Check out all the action:

ZEDD OF HOUSEHOLD: Get in the car and head for the ATM; it’s time to mix top 40 tunes and Target trips with Zedd, Maren Morris and Grey, as “The Middle” holds at #1 for the second week on the Top 40 radio chart. It gains just under 1,000 spins in the current tracking week, landing it above 18,000 spins during the last seven days. Morris’s “Rich” continues its rise in the lower rungs of the Country chart, though it’s still below the top 40. Meanwhile, on both surveys, “Meant To Be” from Bebe Rexha and Florida Georgia Line appears to be headed towards the top spot, holding at #3 on the Country list and up 3-2 on the Top 40 airwaves. The big collaboration currently appears on Rexha’s EP All Your Fault: Pt. 2, which was released in August of last year, and it is meant to be in the mix for her forthcoming full-length album Expectations, due later this year. Who gets the prize next Sunday? At this point, “Middle” has the edge for a third week at #1, but “Meant” could always spring ahead. Stay tuned.

PRELUDE TO A “KISS”: After receiving hourly airplay across iHeartMedia stations during its first day in the market, the current collaboration from Calvin Harris and Dua Lipa enters at #32 on the published chart update. “One Kiss”, which should appear on Harris’s forthcoming album later this year, is now the 17th top 40 song for the Scottish-born performer and the sixth for the English singer, the latter also at #21 this week with “IDGAF” off her self-titled album. Much of the action in the top 50 is also slow, but there are two entries in the region, led by Echosmith‘s “Over My Head” at #47. It’s the trio’s first chart song with the current lineup, and marks their first time in the top 50 since October 2015, when “Let’s Love” also reached that #47 position. (“Over” is likely to make it higher in the coming weeks.) Lastly, at #50, Sam Smith and Logic prepare to “Pray” for Top 40 glory with a new version of a song that originally appears on Smith’s set The Thrill Of It All from last year. Additionally, “Pray” is at #30 on this week’s AC update, and should rank on the Hot AC chart very soon.

It’s time once again to analyze the airwaves and find out if your favorite new releases will be lighting up your local station’s playlist this week. Which tunes will climb to the top and which ones will hit a stop? Here are two exciting tracks impacting this week at the Top 40 format: