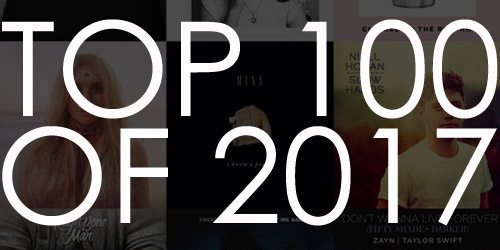 The 2017 chart year encompasses a period of 52 weekly surveys from the chart dated December 4, 2016 to the chart dated November 26, 2017. Peaks listed reflect the highest position reached by the final list of this period. For any ties in points, a song with a higher peak is listed first, and further ties are broken by the weeks charted in the top 40 and top ten. 176 titles had at least one point qualify towards the year-end chart, an increase from the 168 that did so in 2016.

This year marked Michaels’s transition from hit songwriter to hit singer, as the 24-year-old performer had no issues making her first run up my chart a very memorable one! Not only did “Issues” spend a week at #1 in April, as well as 13 weeks in the top ten and 25 in the top 40, but Michaels also becomes the highest-ranking woman on my year-end chart. Not a bad way to end 2017, right? Though her follow-up singles haven’t been nearly as successful, the Best New Artist nominee is still slaying.

After three consecutive chart-toppers with the trio fun., Jack Antonoff and Bleachers returned to #1 on my personal chart in May 2014 with “I Wanna Get Better”. Things got even better for the multi-talented writer, producer and musician in the last year, with three of his co-writes/productions (songs for Lorde, ZAYN & Taylor Swift and Swift solo) spending time at #1 between February and October. Of course, that doesn’t even include his own lead single from Gone Now, which had a pretty solid five-week run during the month of May and early June. I’m sure Antonoff will continue to make great music next year. 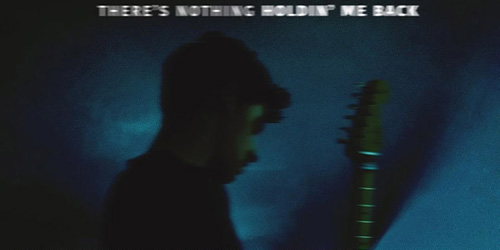 I’ll admit it: I wasn’t a fan of “Life Of The Party”. I didn’t really get it at the time, and it still doesn’t get much play at all from me now. Luckily, since that release, Mendes has been making the case for me to stan for his singles, and this song got plenty of love on the countdown earlier this year. Taken from a reissue of his chart-topping Illuminate album, “Nothing” held at #1 for three weeks on my chart and spent 27 weeks in the top 40, making it the teenager’s first #1 and longest-running single of his career so far on Adam’s Top 40. With 2018 just around the corner, will Mendes strike again with another #1 on my chart or even several chart-topping hits from an upcoming release? Nothing’s been announced yet, so stay tuned for more details.

Prior to 2016, I didn’t know much about Rory Graham or his music. However, when I first listened to “Human” sometime in September of last year, as it crossed over to the many European charts, I knew it was meant to be a worldwide hit. Though it did spend several weeks at #1 on the Alternative and Triple A charts here, it could’ve done way better at other radio formats. Alas, I’m biased. The musical monster that is “Human” spent six weeks at the top of my chart in January and February, with a total of 29 weeks in the top 40, a run that began in November 2016. Two follow-up singles from the Human album, “Skin” and “Grace (We All Try)”, failed to enter my list, though the former track did achieve some moderate success in a handful of countries. (Don’t call him a one-hit wonder yet, kids.) Though it fell short of the top spot on my year-end Top 100, “Human” remains a winner in my book, a very strong runner-up that will certainly get some play for me for some time to come.

If you’ve been watching my chart closely over the last year, you knew that One Direction‘s Niall Horan was on my radar in a big way. Two of his singles with the group, 2013’s “Story Of My Life” and 2015’s “Drag Me Down”, reached #1 on my chart. Then, in December of last year, “This Town” landed at the summit for one week. However, as much as I like the guy’s music, I never expected the young Irish singer/songwriter to dominate the summer months and the year with a dirty little ditty like this. At seven weeks on top, “Slow” was the longest-running #1 song of 2017, narrowly missing out on 30 weeks inside of the top 40. The big question now, of course, is will “Too Much To Ask” hit #1 after seemingly stalling at #2 for weeks now? Can’t say I have a definitive answer to that yet, but we’ll all know soon enough. For now, I’m so glad that Horan gave the world the quality singles and album (and tour) that he did in 2017; he really delivered in every aspect. Now, enshrined in the great hall of musical memories and spectacular singles, hangs a special recognition of the bop that was (and is) “Slow Hands”, proudly taking the title of my #1 song of Adam’s Top 100 of 2017.