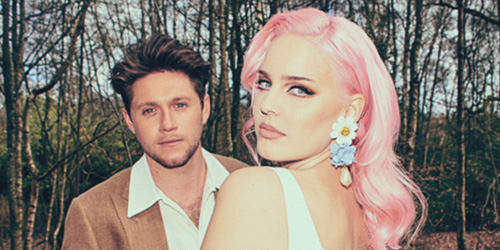 It’s time once again to analyze the airwaves and find out if your favorite new releases will be lighting up your local station’s playlist this week. Which tunes will climb to the top and which ones will hit a stop? Here are four new titles impacting this week at the Top 40 format:

ANNE-MARIE & NIALL HORAN, “Our Song” (Warner)
Album: Therapy (2021)
Past T40 History: Currently in the top 30 at the Hot AC radio format, this cut from Anne-Marie’s upcoming album heads for adds.

NIC D, “Fine Apple” (Casablanca/Republic)
Album: TBA (2021)
Past T40 History: After a quick viral run on TikTok, the artist and podcast host impacts at the pop radio format with his first song.

TATE MCRAE x KHALID, “Working” (RCA)
Album: TBA (2021)
Past T40 History: This single started at #43 on Sunday’s published chart update and has a good chance of leading the adds report.

TONES AND I, “Cloudy Day” (Elektra/EMG)
Album: Welcome To The Madhouse (2021)
Past T40 History: The Australian performer is looking for her third top 40 song. Her biggest to date, “Dance Monkey”, went to #6.

Next week: Ed Sheeran has a habitual hit for the pop panel.

First is the worst, second is the best, and the third one allegedly has the treasure chest. I have my doubts about that whole saying. However, these third singles could take the gold if they get enough attention from radio stations and retail. Will these two mainstream bands find that the third time is the charm? Here’s a preview of two songs you can expect to hear later this spring and summer.

Here they come again. Rob Thomas and the boys released their latest album, North, last year. While it did achieve a #1 debut on the Billboard 200 album chart, it hasn’t been certified yet, and radio support has been lacking significantly for the project. In fact, their last U.S. single, “Overjoyed”, was their first single to miss the Hot Adult Contemporary top ten since 2004 and their worst performance for a second single ever. Ouch. (“Put Your Hands Up” was released in Australia while “Overjoyed” was pushed here in the States; it didn’t do too well either.) Luckily, the boys are dusting it off and moving onto a rather energetic single that could’ve started off the album on the right foot in the first place. That would be “Our Song”, which goes for Hot AC adds on April 9. It already has an early add at Sirius XM/The Pulse. It was solely written by lead singer Thomas and produced by Matt Serletic. Now, this is the type of pace and sound that gave them a hit in “How Far We’ve Come” back in 2007. Sure, it’s not the typical Matchbox Twenty record, but it’s good to hear them sound alive. It’s uptempo, catchy, and fits in with everything that’s on radio now. Thomas sings, “I’m gonna be there always/After the pain has gone away/The feelings are so strong/This could be our song.” Short and simple and it does the trick. Will it be the “song” that gives substantial airplay and sales again? Probably not, but I’d like to be proven wrong. I’m imagining a #25 peak or so at the format at best, but it’s a song that could do well during the summer months (hence, the release) so we may have to wait it out. I’m just glad they even received a third single in the first place. The band begins their tour with another struggling 90’s group, the Goo Goo Dolls, in June, and is sailing the seas on a fan cruise this coming December. Hope they don’t have to walk the plank…

…but is it yellow?

When folk music became fashionable on mainstream radio, our new favorite folksters from Colarado were blazing the trail with top five hit, “Ho Hey”, a foot-stomping, shout-it-out jam in just about two-and-a-half minutes. The multi-format smash continues to receive a lot of airplay today. Followup single “Stubborn Love” is already a hit at Alternative radio and it’s being serviced to CHR radio at this point. “Stubborn” is also a former #1 song at AAA radio, where this next single will be headed in just a few weeks. It’s available for airplay at this point, but no adds date has been revealed thus far. Something tells me that it won’t submerge into the seas of songwriters on that radio format despite that song title. “Submarines” was co-written and produced by band members Jeremiah Fraites and Wesley Schultz. It’s a weird subject matter for a single, but I think it will be the subject of a lot of analyzing should it blow up. The narrator talks about Japanese “submarines/Underneath deep blue seas/…No one will believe me.” Now, originally I thought it would have something to do with Pearl Harbor, but Baldwin Bay is also mentioned in the lyrics, which is off of Long Island. Huh? Is it a dream? Is it a symbol for something that happened for one of the writers of the song? Eerie ending, too: “In the end it boils down to credibility/I had none, so I will die with the secrets of the sea.” Goodness. There’s too much to unpack with this song. (Anybody want to help me out?) Although I think it’s meant to be another tune to tap your feet to, the drums almost sound like gunshots being fired out of a cannon. Better watch your hat. I do like the focus on piano on this song, however. It’s clearly not meant to be a pop hit, because tweenagers would probably turn the dial within five seconds of it starting, but it’s a good enough. It should swim rather than sink on their core formats.

Will either track become the breakout hit of the summer? Will they fade within the musical landscape? Let me know in the comments or on Twitter: @AdamFSoybel.