A Gaye Old Time: The Battle Of Two “Healing” Hits

Movin’ to some Marvin.

The music of the legendary Motown singer Marvin Gaye has been appreciated by many fans and many more musicians over the years. It’s also gotten a few of those acts into some notable legal issues, but there’s no need to blur the lines here: Gaye, his music and his message remain a key part of the songs we enjoy in 2015. So, I guess it was inevitable that he’s being covered and sampled again even after some people might have been (at least temporarily) scared away from utilizing music of his catalog. In fact, we’re coming upon two different singles, both fighting for pop radio glory, that sample his 1982 smash “Sexual Healing”. Yet, this leads us to a few questions, though the answers won’t reveal themselves for some time. Will both tracks be able to coexist in the top 40 at one time? Will they cancel each other out? Will Charlie Puth and Meghan Trainor‘s recent smash “Marvin Gaye”, which is now descending the chart, play any role in how these two chart runs play out? Let’s take a look at what may happen.

Already rising up into the top 20 at Rhythmic radio and heading upward is “The Fix”, a new release from Nelly that also features Jeremih. The latest tune from the St. Louis rapper has also picked up a small group of stations on the CHR radio panel, where it finds itself just below the top 50 and making some gains, albeit much smaller ones. “Fix” marks the debut single for a record label called RECORDS, which is a new partnership between SONGS Publishing and RED Music in the Sony family. Of course, this does mean that the performer is no longer with Universal, whom he was signed to for over a decade. Nearing his 41st birthday in just a few weeks, the ageism of pop radio is likely to take its toll on this track, at least to an extent, but consistent sales in the top 100 on iTunes and almost 7.5 million streams on Spotify are proving that this has some strength in the marketplace. Give it some time; it may just be a surprise sleeper song for the fall.

Of course, that sleeper status will, no doubt, be affected by the other single searching for open slots on radio playlists. This one is heading for adds at CHR radio on October 20, but it will potentially start gaining some spins earlier than that. It’s “Try Me”, sung by Jason Derulo and featuring Jennifer Lopez, along DJ/producer Matoma, who you may know from his tropical house flip of a Notorious B.I.G./Ja Rule/Ralph Tresvant song, titled as “Old Thing Back” for the new release. That single was a big hit in Norway and Sweden earlier this year. Derulo’s third single from the album Everything Is 4 is his followup to “Cheyenne”, a top 20 single that recently crashed hard due to a lack of sales momentum (and a number of late Q3 singles by top-tier acts debuting at the same time.) We’ll see if that stalling has done any damage to the era, or if “Try” can carry Derulo and company back to the top again. It’s now at 45 million streams on Spotify.

This is an interesting situation, to say the least, and it’s one where anything can truly happen given the track records of both main acts involved. We’ll keep you updated on how these new releases do at radio as the year goes on! Until then, follow and like us on various social media sites for more musical mending and record rejuvenation by clicking the Get Social! tab above.

The Trouble With “Trouble”: A Swift Ascent To The Top 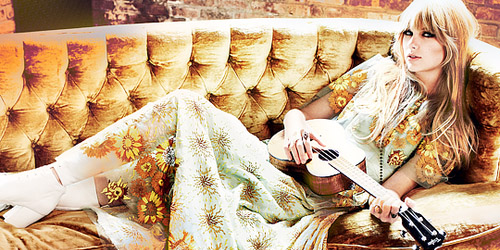 A girl in “Trouble” is a temporary thing.

This week, Taylor Swift takes a two-notch climb to #2 on the Billboard Hot 100 with yet another winner of a hit, “I Knew You Were Trouble”. It’s off her latest disc, Red, which has sold close to 3 million copies in the States in just the three or so months it’s been out. However, if you thought she was the only one to cause a little chaos at the top of the charts, then take a seat on the “cold hard ground” and tune yourself to five other “Trouble” smashes that broke into the top ten on the Hot 100, one of which was a huge #1 song.

THE FORTUNES – “You’ve Got Your Troubles” (1965)
In the heat of the British Invasion of the 1960’s, one of the bands to follow the mighty Beatles was this band from Birmingham, England. It was their biggest hit to date in the U.S., peaking at #7, though it hit the #2 spot in the United Kingdom. Other than that, the group was rather unfortunate in the States with several low charters until a surprise top-20 hit in July 1971, “Here Comes That Rainy Day Feeling Again”. The group never charted that strongly again.

SIMON & GARFUNKEL – “Bridge Over Troubled Water” (1970)
It’s a classic and one of my favorite songs of all-time, but exclusively this version of it. Written during a period of conflict within the duo, this beautiful ballad stormed the Hot 100 and spent six consecutive weeks at #1, ensuring its status as the #1 song of the year and the #2 song of the decade (only beat by Debby Boone‘s “You Light Up My Life”.) It’s by far the biggest “Trouble” single to make it onto the charts, though we’ll see if Swift can top it. The duo had a handful of top-40 hits after this and both had solo material that did well, particularly Paul Simon‘s early to mid-70’s catalogue.

ARETHA FRANKLIN – “Bridge Over Troubled Water” (1971)
Almost a year after the Simon & Garfunkel version had left the charts, the Queen Of Soul, Aretha Franklin, took her R&B rendition of the song to #6 on the Hot 100, her first top ten hit at the time in nearly three years. This version was also heard on the television show Glee, with actress Amber Riley providing the lead vocal. Linda Clifford took her discofied version of the song to #41 on the Hot 100 in 1979. It was also the original a-side to Clay Aiken‘s first post-American Idol single, but was listed on the charts under the b-side’s title, “This Is The Night”, for most of its run because it received more airplay.

MARVIN GAYE – “Trouble Man” (1972/3)
From the soundtrack to the film of the same name, this became another hit for Gaye, peaking at #7 on the Hot 100 in early 1973. It also hit the top 5 on the R&B chart. Rapped T.I. recently released an album that was titled Trouble Man: Heavy Is The Head, partially inspired by the song. Gaye caused some major trouble on the charts for the next ten years with songs like “Let’s Get It On” (1973) and “Got To Give It Up” (1977) until his untimely death in 1984.

LINDSEY BUCKINGHAM – “Trouble” (1981/2)
During a break from Fleetwood Mac in the early 80’s, both Buckingham and Stevie Nicks recorded solo projects. Though the solo LP from Nicks, Bella Dolla, was more successful, Buckingham also managed to score a top ten song of his album, Law And Order. It peaked at #9 in January 1982, just before Billboard changed chart policies, which sent it flying downward as it soon as it exited the top 40 in early February. Buckingham continued with the Mac for a few more albums and had one additional solo top-40 hit in 1984, “Go Insane”.

Have another favorite “Trouble” song? Let me know in the comments or on Twitter: @AdamFSoybel.