BEHIND THE GROOVE: A “Nu” Sound For Austin Mahone 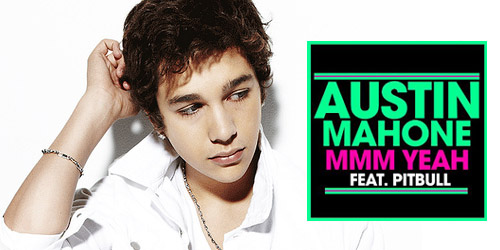 Were you watching the GRAMMY Awards on Sunday night? You may have noticed a commercial in-between starring singer Austin Mahone for Aquafina FlavorSplash, a new line of flavored waters from the beverage company. The song featured in it is “MMM Yeah”, featuring rapper Pitbull, his now fifth radio single from an album that has yet to be released, Junior Year. While he and his friends are magically transformed into a colorful CGI soundstage in that 30 second clip, the song has been magically lighting up the music world thanks to the performer’s usual pre-order setup and, of course, a rabid fan base.

After being released on Sunday morning and reaching #2 on the overall iTunes singles chart, it’s falling down thanks to the GRAMMY effect on several acts who won big awards, but a decent week at CHR radio with a few key medium and large market adds will help sustain its chart life through the spring. (I think.) However, as a composition itself, “Yeah” is built around a pretty memorable song from the early 90’s, though I’m guessing that the majority of his fans weren’t even born when the song was active. That’s pretty depressing. Let’s go Behind The Groove and hone in on what Mahone’s cooking:

The sample:
“Nu Nu”, Lidell Townsell (1992) (PEAK: #26, Hot 100)
Townsell was a Chicago-based dance and house act, first recording in the late 80’s for local label Trax Records to some success. In 1991, he signed to Mercury, who released a full-length album the next year, Harmony. First single “Get With U” was a minor pop (#78) and more significant dance (#4) hit, but it was this second single that managed to pick up a little more action. Featuring the duo M.T.F., “Nu” reached #26 on Billboard’s big survey and crossed over to R&B radio with a minor peak of #44. However, it was even bigger in the clubs than “Get”, going as high as #2 on the Dance/Club Play chart, which led to strong physical sales of the single in both 12″ vinyl and maxi CD form. With a simple arrangement and a focus primarily on the lead vocals, it definitely made an impact, and perhaps even influenced some house tracks going forward.

Covered and sampled by:
“Nu” hasn’t totally been ignored by those producers and writers out there, but of the few songs that have actually sampled it, none went on to be an overwhelming success. Most prominently, the New York quintet Fannypack, who achieved a little bit of CHR airplay in 2003 with the song “Cameltoe”, sampled the song and retitled it as “Nu Nu (Yeah Yeah)” in 2005 on Tommy Boy Records. Like the original, its most notable run was on the Dance/Club Play chart, where it peaked at #29 during an 8-week ride. The airplay numbers on it were non-existent, which is more like a “no no” rather than a “yeah yeah”.

This short history leads us to…

“MMM Yeah”, Austin Mahone featuring Pitbull (2014)
…and back to the current hit, which if you haven’t heard already, you can listen to above. If you’re familiar with “Nu Nu”, you know that “MMM Yeah” interpolates the entire first verse and the chorus (roughly about the first 45 seconds), with a slight variation in the melody of the latter section. (The first verse is utilized as a bridge and/or pre-chorus here.) Of course, “Yeah” also sounds a lot like a prior Pitbull hit, “Don’t Stop The Party”, which peaked early last year. Originality doesn’t run very far with this new single. Nevertheless, if a hit is meant to be a hit, radio will serve it and the sales will continue on.

For more on your favorite music, from sampling to singles to statistics, keep it here on the blog or follow me on Twitter: @AdamFSoybel.