The world’s gone madly lately; so have some of the songs that made my top 40 since the beginning of the year. I’ve gone from “Crazy All My Life” by Daniel Powter to “Keep Me Crazy” by Chris Wallace and finally, “I Want Crazy” by Hunter Hayes. That is crazy, at least it’s certainly more “crazy” titles than I can remember in any given chart year. Luckily, if you’re a fan of all the madness, the songs aren’t getting more sane anytime soon. Behold, the latest in silly singles, singers gone screwy and all that is mental in the music industry:

Bad to the bone.

Here’s the young singer who many liken as the British equivalent of Justin Bieber, but Conor Maynard has proven that he has a musical identity of his own, and one that many people like. His debut album, Animal, debuted at #1 in his native U.K. and was certified Silver. Though a push in the U.S. was attempted late last year and earlier this year, things didn’t really pan out as the label wanted, and he never got his due justice on the charts. However, last time around, Maynard peaked at #6 in the United Kingdom with the title track in a new version featuring British rapper Wiley. It was his fourth consecutive top ten single in a row there. Now, he looks to extend that streak to five with his newest single, “R U Crazy?” It leads off his second album, due this fall. He promised a new sound on this record and he’s definitely achieved it with this single, which begins as a more traditional swing number before transitioning into a hard-hitting urban beat. (The video version I’m describing his a slightly different feel than the radio version, but both are online.) It appears that Maynard wants to be a bad boy of pop now given a darker shift in image and music. I mean, where did “I ain’t your mister/’Cause I’m breakin’ up with ya/Shoulda hooked up with your sister/Go now, here’s my middle finger” come from? Complete 180 right there. However, it works for him. It’s a hit, and should the time come to try the U.S. once again, I think pop radio would embrace it fully. 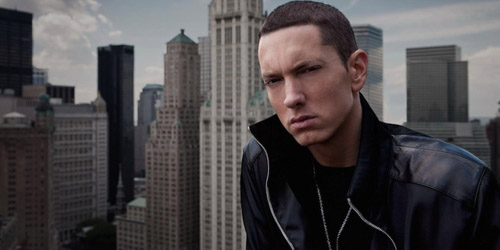 A dire case of Squier.

Guess who’s back? Yes, it’s the dude from Detroit who keeps turning out new music that brings the hype. His next album, a sequel to his Marshall Mathers LP, is due November 5 in the heart of Q4. Produced by the legendary Rick Rubin, the rapper’s latest track takes us back to the 1980’s and Def Jam Records, an homage of sorts to the unpolished, raw nature of some of the recordings from that era. It might be a little messy on first listen given the more street feel of it, but it’s for sure a grower and you’ll want to listen again and again. What works so best about it is the sampling in it: you can hear a small vocal sample of “(You Gotta) Fight for Your Right (To Party!)” by the Beastie Boys in the first verse (and a few variations of it) but taking prominence in the arrangement is 1981’s “The Stroke” by Billy Squier, which was a top 20 hit on the Hot 100. Primiarly a rock musicians, he did very well for himself for a while on that survey and on the national scene, but since he began, the hip-hop community has taken even more of a liking to Squier’s work. Think of how many acts over the years took a sample of the drum break in his song “The Big Beat”, including Jay-Z on 2004’s “99 Problems” and Alicia Keys on her hit of last year, “Girl On Fire”. You may hear Squier’s material all over the classic hits airwaves nowadays, but this one will certainly bring him back on the pop scene. It’s a cool idea that sounds fresh even though it’s rooted in the decades past.

Feeling wacky about either Conor Maynard or Eminem‘s new songs? Comment below, follow the blog below or click the “Get Social!” page to find PGTC on social media.