Tag Archives: Alvin and the Chipmunks

A Sketch Of Success: The Pop Chart Gets Animated 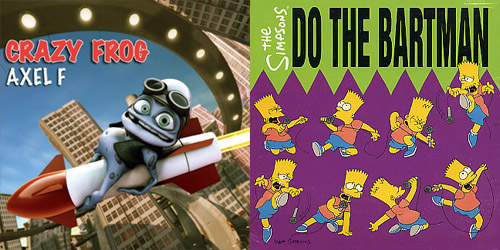 If you think you’ve been hearing the voice of Spongebob Squarepants on your radio recently, no, you’re certainly not dreaming. That endless loop of “I’m ready! I’m ready!” is featured in the first top 40 entry by a trio called AJR, the three Met brothers (Adam, Jack and Ryan.) “I’m Ready” has been slowly climbing up in CHR airplay since being upstreamed to Warner Bros. Records several months ago (initially, it was spun on SiriusXM exclusively last fall) and right now, the boys are on tour with Lindsey Stirling.

What makes “Ready” so interesting is that “feature” from the Nickelodeon cartoon character; even though he receives no credit, it still marks the first animated character to hit the chart in some time. Unlike the glory days of chart-topping acts like Alvin and the Chipmunks and The Archies, cartoons on the countdown are far and few between. International singles have an even harder time breaking the U.S. market, like Bob The Builder and his two U.K. #1 hits, the Canadian duo Prozzäk (out in the U.S. as Simon & Milo) and the German crocodile named Schnappi.

Here are a few to sell some records (and perhaps seal some ratings) since the 90’s, ready for your viewing pleasure:

BEAVIS & BUTT-HEAD
Uh, huh huh huh. Can you believe that dynamic duo from MTV actually reached the top 40? Taken from the compilation album The Beavis and Butt-head Experience, “I Got You Babe” (a duet with Cher) charted for two weeks on the CHR top 40, peaking at #34 during the week before Christmas in 1993. As you can imagine, it’s a bizarre take on a 60’s pop classic.

CRAZY FROG
They call it The Annoying Thing, and honestly, that even feels like an understatement. Released in the summer of 2005, this remake of the 1985 Harold Faltermeyer hit “Axel F” was inescapable across Europe, spending four weeks at #1 in the United Kingdom alone. The CHR panel wasn’t so crazy about the single, as “Axel” limped up to a low #36 that August.

GORILLAZ
Probably the best known of the modern acts on the list is the four members of this virtual band, voiced by Blur frontman Damon Albarn. Though they first charted in 2001 with “Clint Eastwood”, their biggest single thus far is 2005’s “Feel Good Inc.”, which climbed to #13 on CHR radio and #1 at Alternative for eight weeks that fall. It featured rappers De La Soul.

MC SKAT KAT
In another uncredited performance, this animated feline danced and rapped alongside Paula Abdul on one of her many #1 hits, “Opposites Attract”. The MC managed to slip onto the Hot 100 a year later with a solo single, “Skat Strut”; Abdul returned the favor and made a cameo in that single’s clip. It peaked at #80. It fared better in several overseas territories.

THE SIMPSONS (BART SIMPSON)
During a time when singles intended for radio and not physically released could not enter the Hot 100, “Do The Bartman” quickly broke out nationally thanks to the popularity of the FOX show. By early 1991, it was already up to #9 on the pop chart and #11 on Billboard’s comparable Hot 100 Airplay list. Followup “Deep, Deep Trouble” found trouble gaining big.

Who’s your favorite animated artist to a paint a pop masterpiece? Let me know! You can comment below or find me on social media by clicking the “Get Social!” tab above.