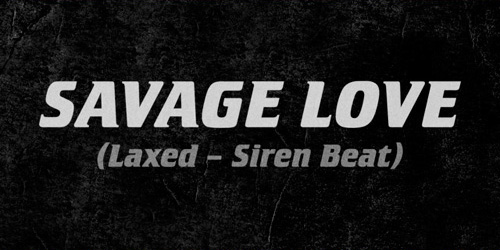 Welcome to Radio Active, a Sunday evening report from POP! Goes The Charts that gets to the chart of the matter: all the highlights from the CHR/Top 40 chart, as published by Mediabase 24/7 and Mediabase Research. Plenty of huge releases are levitating up the chart this week, so let’s see what’s popping at the format:

“LOVE” GOES ON: Jawsh 685 and Jason Derulo hold at #1 on the Top 40 radio chart with “Savage Love (Laxed-Siren Beat)”, a title that they share with BTS due to a new remix of it. The collaboration easily earned a second week at the top and it should grab a third week before its run concludes. “Savage” also ranks in the top ten at the Hot AC (#6) and Rhythmic (#10) formats.

In the top 40, Dua Lipa‘s “Levitating” leaps from 45-27 on this week’s Top 40 chart, becoming her 11th top 40 hit at the format. Up from 42-34, Travis Scott, Young Thug and M.I.A. roll in with “Franchise”. The track becomes their ninth, fourth and second top 40 entries, respectively, a week after the collaboration debuted at the top of the Billboard Hot 100. Why Don’t We lifts from 48-38 on the chart with “Fallin'”, their fifth top 40 entry to date. Finally, format newcomer Tate McRae is up from 41-39 with “You Broke Me First”, a song that is already a top ten hit in countries like Australia, Ireland, Norway and the United Kingdom.

The top 50 is also pretty busy this week: the Machine Gun Kelly and Blackbear collaboration “My Ex’s Best Friend” grabs a spot in the region before its impact date on Tuesday, debuting at #43. The single also lands just below the top 40 at Alternative radio. Ali Gatie and Alessia Cara are new at #44 with “Welcome Back”, followed by newcomer Salem Ilese‘s “Mad At Disney” at #46. New at #47 this week, Bastille is back in the top 50 on the pop survey for the first time in a year and a half with “Survivin'”, which is also growing at two other formats: Alternative and Hot AC. Lastly, Olivia Rox‘s “Shooting Star” is in at #50.