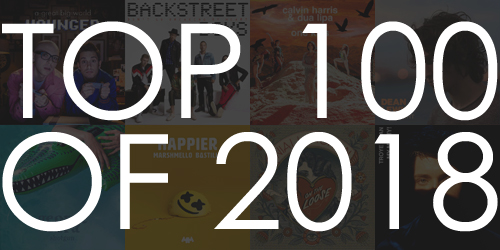 As 2018 draws to a close, it’s time for the annual Top 100 of the year! According to my tabulations, these titles ranked as the most successful on my personal chart. 2018 may have been a doozy on the political front, but in the musical world, plenty of great singles and performers made their mark on my listening habits this year. “Love” was a constant presence in the top 40 for much of the last twelve months, from “Love So Soft” to “Love Someone” to “Say Love” and many others. We also found a “New” perspective from big titles like “New Light” and “New Rules”. “High Hopes”, “High Horse” and “Hell Or High Water” kept us in the heights of a diverse year for sounds, while “You”, “Me” and everybody in-between got their equal share of pop pronouns. Phew… that was a lot, and there’s much more to come! Who will spread the word and have my #1 song at the end of the countdown?

The 2018 chart year encompasses a period of 52 weekly surveys from the chart dated December 3, 2017 to the chart dated November 25, 2018. Peaks listed reflect the highest position reached by the final list of this period. For any ties in points, a song with the higher peak is listed first, and further ties are broken by the weeks at a song’s peak position and the amount of time charted in the top 40. 171 titles had at least one point qualify towards the year-end chart, a decrease from the 176 that did so in 2017.