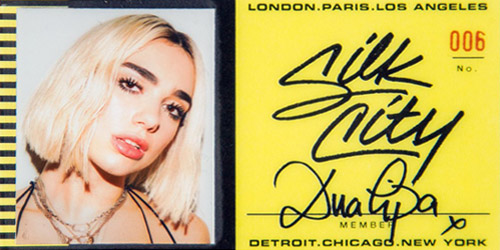 Welcome to Add Lib, your Tuesday report on POP! Goes The Charts that’s mad about CHR/Top 40 adds, based on the station data provided by Mediabase 24/7 and Add Board. This week: an electric collaboration impacts at the format, but a pre-impact pop song (that may or may not be about you) is picking up some classic call letters. Let’s dive in and add ’em up:

TAKIN’ BACK THE CITY: As Rosh Hashanah comes to a close once again, it’s a sweet new year (at least, so far) for the new duo Silk City (consisting of Diplo and Mark Ronson) and pop star Dua Lipa, who charge up the format with their “Electricity”. On impact, the song shocks a total of 34 stations, making the hot collaboration the Most Added song at the Top 40 format this week. It appears on Lipa’s forthcoming reissue of her self-titled album, out October 19. The two producers have released a handful of tracks so far in 2018, including collaborations with soloists such as Daniel Merriweather and Desiigner, though it’s not clear if an EP or album from the duo may be coming in the near future.

Meanwhile, Mike Posner has a very strong start for “Song About You”, which he hopes will be his first top 40 single at the format since 2016, when “I Took A Pill In Ibiza” spent two non-consecutive weeks at the top. A week before its official impact date, “Song” is not singing blue, but it is seeing green with 30 stations during this session. Posner’s latest single will be facing off against several competitors on next week’s adds update, including a collaboration from David Guetta and Anne-Marie, the first crossover song by country duo Dan + Shay and a personal favorite from pop singer Nina Nesbitt.

Expect both “Electricity” and “Song About You” to reach the top 50 by the weekend. Stay tuned for more pop madness on PGTC!