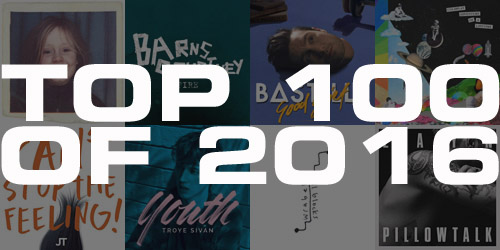 All the top tunes from the year that was.

Are you ready for my top five songs of 2016? I sure am. Well, I hope I am. I charted them all for lengthy periods of time…

Three solo males, one solo female and a group remain on our quest to the top of the charts, but only one can make it to #1. It is now time to see where they rank…

The 2016 chart year encompasses the period of 52 charts from the list dated December 6, 2015 to the list dated November 27, 2016. Peaks provided reflect the highest position reached by the final chart of the survey year. For any ties in points, a song with a higher peak is listed first, and further ties are broken by the weeks stayed in the top 40. 168 songs in total had at least one point qualify towards the year-end chart, an increase from the 165 that did so in 2015.

This English band knows the top spot quite well on my personal chart, but their two previous #1 songs, “Pompeii” (2013) and “Of The Night” (2014), couldn’t get beyond a second week at the summit. That changed this year with the release of this song, which quickly topped my chart and stayed there for three weeks in July and August. It also topped the Alternative radio chart for a week in November. It’s too early to tell where “Blame” will place on my 2017 list, but it’s making some solid gains so far.

It was one of the biggest chart crimes of the year; no, not on my own chart, but on the CHR/Top 40 radio chart. After “Hello” soared to #1 in just five weeks, this gorgeous follow-up single stalled out at #11. #11! The shade of it all! However, it did make it to the top spot on my personal top 40 for five enchanting weeks, making it one of four #1 hits (so far) from her latest era. A fifth single from the album could extend her streak in the new year, but we’ll have to see if that actually occurs. I hope it does.

A faster turnover rate meant no songs topped 30 or more weeks in the top 40 during 2016. So, Courtney’s run of 29 gives his excellent song a bit of cred in the longevity department. Just over a year ago, it was included in the trailer and the soundtrack to the film Burnt, and while the movie’s flame faded away, “Fire” had a second life at Alternative and Triple A radio in 2016, a top five hit at the latter format. While I wish it was bigger, and got a fair chance at Top 40 airplay, Courtney’s song is still hot.

In the runner-up position on my Top 100 of 2016, a track that you couldn’t escape for a time over the summer. Regardless of where you heard it, and I imagine it was spun at a few million Bar/Bat Mitzvahs and weddings this year, you just had to dance along to that catchy little tune. Timberlake started off 2016 with a quick top ten song in “Drink You Away”, but the enormous success of his soundtrack hit makes him one of the top artists of the year when total points are added up. If “Can’t” held up in the middle portion of my list for slightly longer, it probably would’ve had an extra week or two to propel it to #1 for the year.

“11 blocks from my door to your doorstep…”

I first heard those words on the morning of June 3 while prepping the next episode of Train Tracks, a SiriusXM show, hosted by Train lead singer Pat Monahan, that airs on channel The Pulse every weekend. I was actually pretty lucky to hear it early. I fell in love with it on the first listen, the perfect combination of an intriguing personal lyric with a very talented vocalist. I was pretty sure early on that it was going to top my personal chart, but my Top 100 of 2016? Couldn’t have anticipated that one…

It was close up until the very end: only ten points separated #1 and #2 this year. In fact, the status of those two songs was just decided on the last chart of the period. Needless to say, it could’ve easily gone the other way, if the right factors were in play.

However, I’m very happy with the result. I’m just disappointed that more people didn’t get a chance to hear it! With a peak of #11 (clever one, Epic) on Hot AC radio, it should’ve done way better. Alas, the situation has happened before. Well, I’m really looking forward to Wrabel’s new music, whenever it comes out, because the feelings are going to be real. Congrats to Wrabel and his team on a great 2016, and best wishes for an even better 2017.

Thanks to all of you for checking out my Top 100 of 2016! Have a great Hanukkah and Christmas, and a Happy New Year!