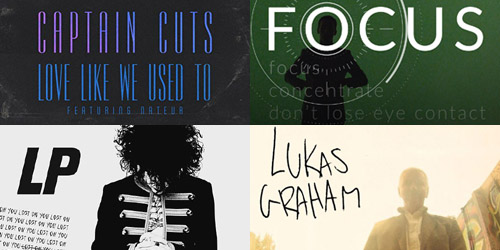 It’s time once again to analyze the airwaves and find out if your favorite new releases will be lighting up your local station’s playlist during the month. Which tunes will climb to the top and which ones will hit a stop? Here’s a selection of new singles being serviced in November in this month’s Radio Report.

CAPTAIN CUTS featuring NATEUR – “Love Like We Used To” (Epic, November 1 – CHR/Top 40)
Album: TBA
Past CHR History: The Los Angeles songwriting/production trio has achieved some success at the format, most notably with “Shut Up And Dance” for Walk The Moon, which reached #2 for three weeks last year. Nateur, writer Nate Cyphert, has not charted here.

JACOB WHITESIDES – “Focus” (Double U/ADA, November 1 – CHR/Top 40)
Album: Why? (2016)
Past CHR History: Tennessee teen Whitesides, who turns 19 later this month, stalled out just below the top 50 here earlier in 2016 with “Lovesick”. Though it likely won’t do much heading into the holidays, the singer has a large group of fans to support the single.

ALEX DA KID featuring X AMBASSADORS & ELLE KING – “Not Easy” (RCA, November 7 / 8 – Triple A / Alternative)
Album: TBA
Past AAA/ALT History: Both featured acts are known at the two formats, the former for hits like “Renegades” and “Unsteady”, and the latter for “Ex’s And Oh’s” and “Under The Influence”. With a strong team, it should be an “Easy” sell for crossover play in 2017.

LP – “Lost On You” (Vagrant/BMG, November 7 – Triple A)
Album: Death Valley (EP) (2016)
Past AAA History: Four years ago, “Into The Wild” achieved some airplay at the format after being featured in a Citibank ad, and it had a brief run in the top 40. However, this release comes to the U.S. with huge chart success across Europe. Don’t let it get “Lost”.

CHARLI XCX featuring LIL YACHTY – “After The Afterparty” (Atlantic, November 15 – CHR/Top 40)
Album: TBA
Past CHR History: It’s been nearly two years since this English singer appeared in the top 40 with “Break The Rules”, which peaked at #23 (and was largely forgotten about after the holiday freeze.) With two #1 songs to her credit, we’ll see how this party plays out.

MIIKE SNOW – “The Heart Of Me” (Downtown/Atlantic, November 15 – Alternative)
Album: iii (2016)
Past ALT History: After a year of tragic and senseless gun violence around the world, a single with a title like “My Trigger” had very little opportunity to become a huge hit at Alternative radio. Still, it made the top 40. Now, the trio hopes to reach the top ten again.

Which of these new songs would you like to see atop the charts? Let me know! Comment below or click the “Get Social!” tab above to find PGTC on social media.