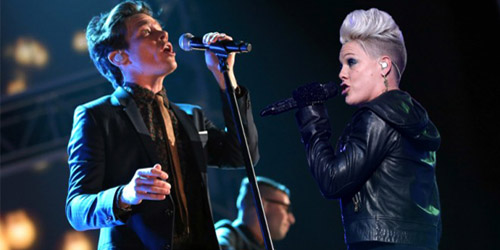 The famous painter and sculptor Leonardo di Vinci once said, “Simplicity is the ultimate sophistication.” I think that’s well-suited to this entry on the countdown, the biggest collaboration on my chart this year. Not only was it simple and elegant, but it was a real work of art, carefully crafted and executed for maximum consumption. Pink and Nate Ruess, you done good, kids.

The #3 song of the year, “Just Give Me A Reason”, was co-written by the two singers, as well as producer Jeff Bhasker, one of driving forces behind fun.‘s breakout in 2012 with their Some Nights album. Initially conceived as a solo song during a songwriting session, Pink ultimately decided that song was offering two perspectives rather than just a singular view on a relationship, and she got the band frontman to take the co-lead on the song. After a demo was well received, the duet made the singer’s album, and when it was released back in September of that year, it was one of the tracks that showed early signs of public demand from strong download sales. Several months later, it was show time, and what a show it put on on the global stage.

After a slower-paced single in “Try”, there were some initial questions as to whether a pure piano-based ballad like “Reason” was the right choice for the third single from The Truth About Love, but those fears were put to rest when the song had an immediate reaction at radio. You literally just couldn’t escape it at one point. Not only was it a multi-format #1, topping the AC, Hot AC and CHR surveys, but it also topped the Hot 100 for three weeks. On my chart, it reigned for five frames: four in March in addition to the first week of April. Internationally, the song went to #1 in over a dozen countries, including Australia, Canada, Italy, Sweden and The Netherlands. Needless to say, it was the biggest success overall during a wonderful era, one that will be well-remembered by both fans and critics alike.

Looking back on 2013, I’d say the results for Pink and Nate Ruess were both pretty reasonable. Both have two songs in the top ten and took over the top spot on my countdown with two separate singles during the chart year. One for Mr. Ruess is still yet to come on the chart, and considering there’s only two positions left, you’ll be seeing where it lands tomorrow. Until then, “Carry On” and wait for the update!

Tagged as fun., Jeff Bhasker, Just Give Me A Reason, Nate Ruess, Pink