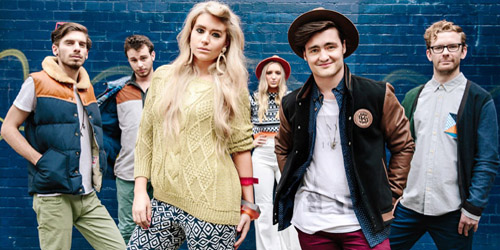 Everybody’s flocking to them.

Time to start rolling out those hot summer songs as the temperatures get hotter and the clothing gets shorter. Now, you’re probably expecting me to start checking off a list of big pop stars with a hot and fresh song. Not so, at least this time around. Get ready for a breezy, blast-worthy song courtesy of an Australian indie pop band who call themselves Sheppard. They have my approval for a huge smash with their first single, “Let Me Down Easy”.

Sheppard themselves are a sextet, a combination of siblings Amy, Emma and George Sheppard, along with musicians Jason Bovino, Michael Butler and Dean Gordon. The three family members originally grew up in Papua New Guinea, but the six of them formed as a band back in 2011 in Australia, currently based out of Brisbane, and have been performing live around the globe for some time now. They have a self-titled EP out, which was actually released last August, consisting of five tracks including “Easy”. (A link is provided below.) A lyric video for this song was put up way back in December, and has several thousand views to date, so why the long wait for these crazy kids to finally get on the airwaves?

It’s only just recently that the band’s been doing the rounds at Australian radio to promote their song, going from coast to coast, and you can see all their lovely photos from their appearances on their social media sites. Luckily, the radio tour has paid off. “Easy” was one of the most added tracks there in the past several weeks and just last week, debuted all the way up at #39 on Australia’s top 100 airplay chart. (It has since fallen back to #42, but several songs made huge leaps ahead of it.) That’s quite an achievement for a relatively new act. With airplay in place, the song recently cracked the top 100 on Australia’s version of iTunes, and things are only looking for the band from here.

While becoming a hit in their native country, I would expect that “Easy” could also be huge in the United States if the band ever decides to push something here. It has a sound about it that just screams summer, from the guitar strumming with the island feel, the tambourines, the tight harmonies, etc. The song is just really well constructed that it puts you in a happy mood wherever you are. If it’s about to be winter in Australia, this track will warm you up just right. It’s sort of a cross between the Barenaked Ladies, the Plain White T’s and maybe even Walk Off The Earth, but with a tad more flavor in terms of that surf music vibe. Their whole EP isn’t exactly like this song, but it seems they do construct their songs with a 60’s pop sensibility, especially on tracks like “Hold My Tongue” or “Pebble Road”.

Even though the song itself is cheerful melodically, it’s actually about a relationship that has its ups and downs; lead singer George Sheppard states, “Night and day, I’ve been doing the math/To calculate where we wandered off track/But I know, this love was never easy.” Ultimately, he decides that she’s the one that wants to break things off, so he ushers her out of his life, nothing he “won’t stand in [her] way” if they do split. Well, even if this case of love didn’t end so well, people are sure loving “Easy”, and you’ll definitely be hearing more about it in the coming months.

Probably the only thing standing in their way of an international takeover at this point is that they’re on an independent label that doesn’t bring up any results when searched, Empire Of Song. I’m wondering if that means it’s a self-released effort. In either case, they can only do so much. They would need to be picked up by a North American based label with some deep pockets that could really help them out. It shouldn’t be too hard with five songs under their belt that show off their skills. Let’s see if someone can work a little magic and get these guys the recognition they deserve. It may not be “easy”, but they’ll get there with a single like this.