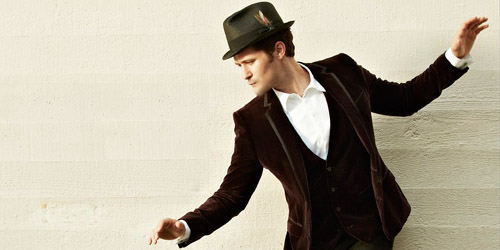 You know him well as the character of Will Schuester on Glee, which was recently renewed for not one, but two more seasons. You think it’s a little premature to come to that announcement? I do too, but the network seems to really believe in it. When he’s not teaching the students at McKinley High, Matthew Morrison is an artist himself. There’s been a little bit out there on his recent developments in the music world, but now that the first single from his second album has magically appeared online, let’s have a listen to it, shall we? First, a little bit of background on the matter.

Glee attained a pretty good audience when it premiered in the fall of 2009, but it wasn’t until the second part of the first season that things really started to pick up for the crew. As the show rocked the ratings, Morrison signed a solo deal with Mercury Records, who released his self-titled debut album in the spring of 2011. He performed one of the songs on it, “Still Got Tonight”, on an episode of Glee that season, and the radio single from the effort, “Summer Rain”, made the top 20 on Adult Contemporary radio. It also made the top 20 on my personal chart, but we know those things don’t count in the real world. Sigh. Despite duets with Elton John and Sting and a top show on the air, he couldn’t really promote the album when it came out, and thus, it debuted moderately and then crashed down, never to be seen again. He was then, understandably, dropped from the label. However, just a year later, Morrison became the first signee on 222 Records, a label put together by the lead singer of Maroon 5, Adam Levine. He’s been working on this project ever since, and now his baby is ready to be revealed to the world in just a few weeks.

Where It All Began marks Matthew Morrison‘s first full release to go in an all-standards direction rather than the pop record he put out two years ago. The twelve-song set, released on June 3, is a mix of songs from the musicals and big band era, from “The Lady Is A Tramp” (from Babes In Arms) to “Luck Be A Lady” (from Guys And Dolls) to the first single from it, a take on the Duke Ellington classic from the 30’s, “It Don’t Mean A Thing (If It Ain’t Got That Swing)”. (You can hear that rendition below.) The album was produced by the late Phil Ramone, so there may be some curiosity buys based on that unfortunate event. There are some peculiar choices, including a duet with Smokey Robinson on “Ease On Down The Road” from The Wiz (who made that decision?) as well as a cover of “Send In The Clowns” from A Little Night Music, which is generally sung from the female perspective, although I guess that didn’t stop Frank Sinatra from recording a version of it. This is purely based on viewing the tracklisting; we’ll see if Morrison’s collection of songs actually works when it comes out in June. (You would think the label would want to put it out for Mother’s Day to cash in on that. Way to go, kids.) The first single is decent enough and a pretty faithful version of the old song, so I have decent-sized expectations for the rest of the eleven tracks.

(Pre-order Where It All Began on Amazon.)

Morrison hasn’t announced a full tour to promote his forthcoming album yet, but he will be doing two dates with the Boston Pops on May 28 and 29, two dates at 54 Below in New York City on June 2 and 4, as well as two dates with the National Symphony Orchestra in Washington, D.C. on November 29 and 30. In the meantime, perhaps we’ll see him pop up on The Voice for a performance with coach Adam Levine on the show. The genre of the album may be a hard sell to younger audiences who enjoy his stuff on Glee, but should he see the older folks come out for it, he may be able to stretch this era a bit. Otherwise, he still has a television to fall back on until the spring of 2015. At least this is the kind of material he wants to do artistically rather than being forced in a studio to record something, and I’m sure that’s enough satisfaction for him.

Listen to the first single from Morrison’s Where It All Began, “It Don’t Mean A Thing (If It Ain’t Got That Swing)”. You can also request it at your local Adult Contemporary radio station, where the song has been serviced as of this week. Let me know what you think of it in the comments or on Twitter: @AdamFSoybel.

Tagged as Adam Levine, Adult standards, Glee, It Don't Mean A Thing (If It Ain't Got That Swing), Matthew Morrison, Musicals, Summer Rain, The Voice, Where It All Began

One response to “PROFILE: Glee‘s Matthew Morrison Serves Up Standards For Seconds”